Dress Like a Byzantine Empress – Byzantine Art in Fashion Collections 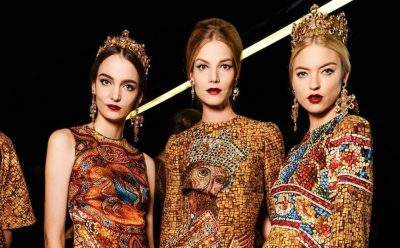 DailyArt Magazine: Have you ever wondered how Byzantine art stepped onto the catwalk? It all started with Empress Theodora and a Byzantine-inspired piece of jewelry from the 1930s – the Ravenna cuff owned by Coco Chanel. The great mosaics of the Byzantine Empire were a source of inspiration throughout the centuries for many artists and creators (Gustav Klimt’s golden paintings are the most obvious example of such inspiration). Let’s see what happens when Byzantine art meets high fashion, shall we? 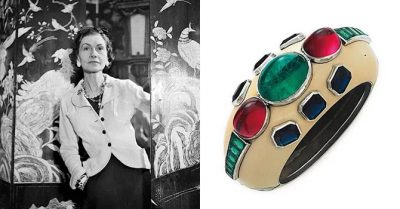 In the fall of 2010, Alexander McQueen presented what turned out to be his last collection, inspired by the Middle Ages. In this collection, among dresses inspired by Hieronymus Bosch’s paintings, we find Byzantine-inspired long gowns – bejeweled and embroidered with gold (some of them also with a floor-length cape inspired by a paludamentum) – truly worthy of an empress. “Coco Chanel is the new Theodora” said Karl Lagerfeld, the creative director of the fashion house Chanel, when he introduced the Pre-Fall 2011 collection inspired by the Byzantine Empress.

“Theodora was a circus artist who became an empress, like Chanel, who was a little singer and became a fashion empress.” 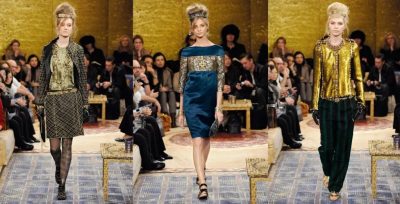 Rich colors, contrasted with gold, colorful gems, and mosaic embroidery reminds us of Byzantine splendor. This elegant collection is a tribute to Coco Chanel, who initiated the trend of Byzantine influence in modern fashion. 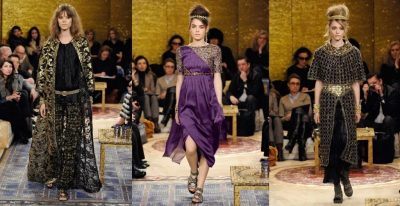 The resemblance to the Empresses Theodora and Irene can be seen in the model’s hair pinned up high, with tiara-like headbands and jewelry. 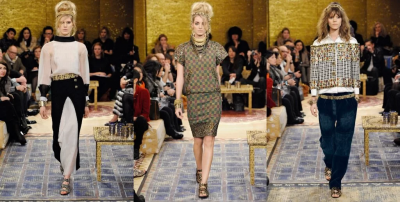 For me personally, the most memorable fashion show inspired by Byzantine art is Dolce & Gabbana FW 2013. Take a look at those stunning golden mosaics from Sicily printed on the clothes, embroidered dresses decorated with cabochons and gems!

n their ready-to-wear collection, Domenico Dolce and Stefano Gabbana represented mosaics from the Santa Maria Nuova Cathedral constructed in the late 12th and 13th centuries. They had 6,340 square meters of tesserae mosaics to choose from as their inspiration! (As some of you might know, Monreale cathedral’s mosaic decoration is the largest mosaic decoration in Italy). 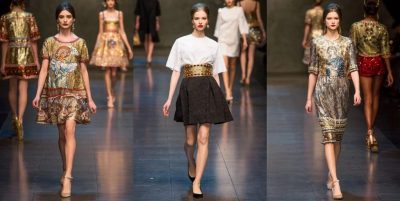 On these short dresses, we have a fragment from the dedication mosaic representing King Willhelm II offering the Virgin Mary a model of the church. The same motif can be seen on the short sleeve shirt.

From right to left: Dolce & Gabbana, Fall/Winter 2013 RTW collection. Photos by Filippo Fior; Monreale Cathedral’s mosaic representing Wilhelm II offering the Virgin Mary the model of the church. Web Gallery of Art. Detail.
…
As we can see, the designers truly covered everything and gave us a real head-to-toe look. Looks were topped with crowns, accessories – earrings, cross pendants (also seen back in 1988 in Christian Lacroix’s fall collection), belts, handbags, and oh my gosh those shoes…
… 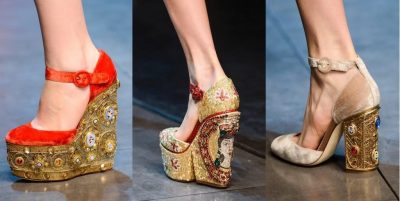 Yet another great example of Byzantine revival in fashion is Valentino’s collection for spring 2016. Designers Maria Grazia Chiuri and Pierpaolo Piccioli stated that their inspiration for this collection were velvet gowns created at the beginning of the 20th century by Mariano Fortuny. 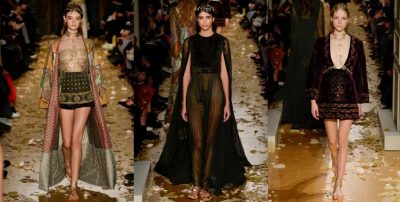 Fortuny, in his model gowns Delphos and Eleonora, recreated ancient Greek chiton and Byzantine tunica. He also incorporated a long cape to his designs as well as shawls (inspired by lorum) and collars modeled by superhumeral.

The rich colors of the gowns, long capes, golden accessories, and mosaic-like ornaments definitely have a Byzantine touch to them. 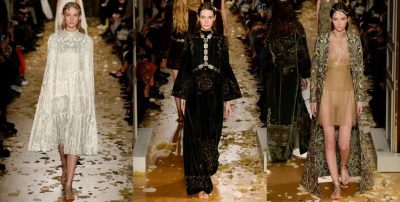 And don’t forget that over the years Byzantine influence was present in jewelry. Fulco Santostefano della Cerda, Duke of Verdura, later the “American jeweler,” revolutionized jewelry with his Byzantine designs; the first of them being the Theodora and Ravenna brooches and costume jewelry line created for Coco Chanel. The inspiration for the iconic pieces were mosaics from San Vitale Basilica in Ravenna, which he had seen during his trip to Italy with Coco.

Art historian and proud member of the DailyArt team! Her main interest in AH is art theory and Italian Renaissance.