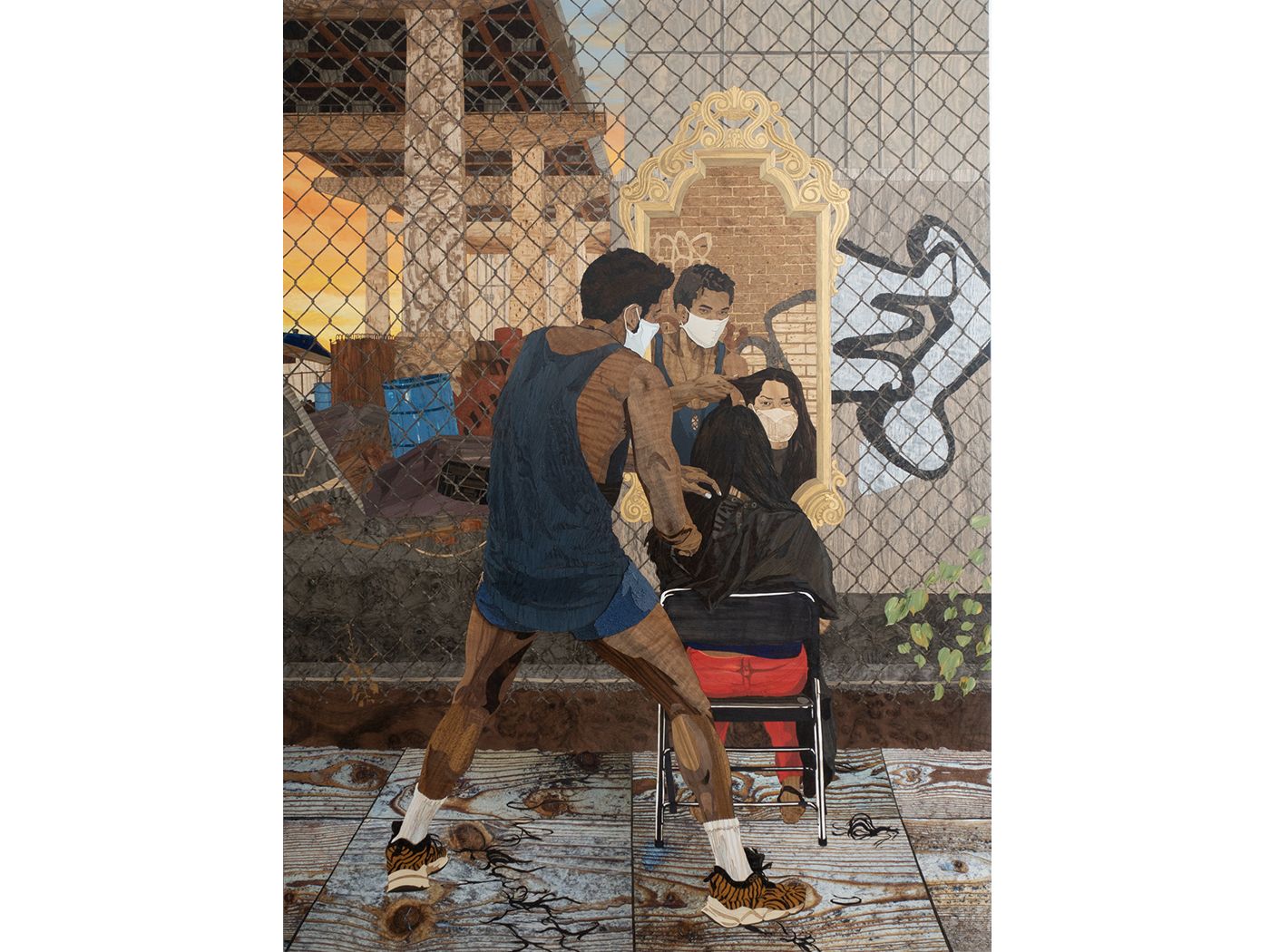 SMART NEWS: In the portrait, hair stylist Anthony Payne crouches slightly, his legs akimbo as he combs his fingers through a seated customer’s dark brown hair. Both wear face masks—a nod to the pandemic that echoes the scene’s setting: not a traditional hair salon, but a graffiti-covered underpass beneath a Brooklyn bridge.

It’s an image that only makes sense after March 2020, when Covid-19 shuttered businesses around the world and sent billions scrambling for alternatives to once-mundane activities: commuting to the office; watching movies at the theater; and, as seen in Alison Elizabeth Taylor’s prize-winning artwork, getting a haircut.

Created in 2020, Taylor’s “marquetry hybrid” portrait—a term she coined herself to describe the blend of paints, inkjet prints and wood veneers that make up the work—has claimed first prize in the Outwin Boochever Portrait Competition, a triennial contest hosted by the Smithsonian’s National Portrait Gallery (NPG). The museum announced the news this morning, ahead of the April 30 opening of a traveling exhibition featuring the competition’s 42 finalists.

“Every Outwin … provides new insights into contemporary culture, so it is not surprising to see representative art that documents a spectrum of emotions and responses to the pandemic,” says NPG’s director, Kim Sajet, in a statement. “… Taylor’s winning portrait is an especially powerful example of how people turned everyday tasks into shared moments of resilience and hope that made us stronger as a community.”

The Brooklyn-based artist will receive a $25,000 cash award and a commission to create a portrait of a living person for the gallery’s permanent collection. According to the statement, a panel of jurors selected her portrait, titled Anthony Cuts Under the Williamsburg Bridge, Morning, from a pool of 2,700 entries, many of which addressed key issues of the past three years: Covid-19, the ongoing fight against systemic racism in the United States, isolation, family and community, love and loss. Taylor’s work, which shows how Payne set up shop outside during the pandemic, offering haircuts in exchange for donations to the Black Lives Matter movement, touches on virtually all of these themes.

Beyond the eight prizewinners, the 42 finalists include a collage of artist Paula Gillen’s friend Taishya standing in outer space; Melissa Ann Pinney’s photo of a Chicago student looking at her reflection in a public school bathroom; and a snapshot of a container holding the ashes of David Hilliard’s father, who died of Covid in 2020, resting on a table in a manmade pond. Voting on the people’s choice winner—selected from the full slate of finalists—will take place online, with the honoree announced in October.

First held in 2006, the Outwin asks artists in the U.S., Puerto Rico, the Commonwealth of the Northern Mariana Islands, American Samoa and the Virgin Islands to “submit work that challenges traditional definitions of portraiture,” per the NPG’s website. Entries take any number of forms, from paintings to sculptures to performance art to time-based media. Participants run the gamut from college students to renowned artists at the peak of their careers.

During the blind selection process, judges—including NPG curators and outside scholars and artists—engage in “heated exchanges and vigorous debate,” wrote Dorothy Moss, curator of painting and sculpture at the gallery and a member of the 2022 jury, for Smithsonian magazine in 2014.

“[T]he selection process is revelatory, providing moments for the jurors … to further study the evolving nuances of identity through portraiture in its multiple forms as it changes in the intervening three years between each competition,” Moss added.

Jurors also examine how artists engage with the medium’s lengthy history—an aspect of the competition reflected in the decision to allow participants to depict historical figures, not just living subjects, from 2019 on.

“In this competition, you see work that is about the contemporary moment and about issues that we are all grappling with as we watch the news,” Moss told Smithsonian’s Andrea Michelson in 2019. “But we are also showing work about historical figures whose lives may be at risk of being erased if they aren’t represented by artists today.”

The most recent winner of the Outwin was Hugo Crosthwaite’s stop-motion animation of Berenice Sarmiento Chávez, a migrant from Tijuana, Mexico. Due to the pandemic, Crosthwaite has not yet created his commission for the gallery. Previous commissions include a portrait of First Lady Michelle Obama by 2016 winner Amy Sherald, a video of jazz musician Esperanza Spalding by 2013 winner Bo Gehring, an inkjet print of chef Alice Waters by 2009 winner Dave Woody and an oil painting of Special Olympics founder Eunice Kennedy Shriver by 2006 winner David Lenz. Sherald’s commission, which featured Obama in a bold, geometric gown against a bright blue background, proved so popular that the NPG sent it on a national tour alongside Kehinde Wiley’s 2018 portrait of President Barack Obama.

“The Outwin … was founded to support the next wave of contemporary portraiture in the United States,” said Sajet in an October 2021 statement. “The diversity of this edition’s entries, from geographic origin to subject matter and media, reflects both the multifaceted story of the United States today and the unique perspectives and lenses through which contemporary artists see that story.”

“The Outwin 2022: American Portraiture Today” is on view at the Smithsonian’s National Portrait Gallery in Washington, D.C. from April 30 to February 26, 2023. The show will then travel to cities across the U.S. Readers are invited to vote for the People’s Choice Award through October 16, 2022.