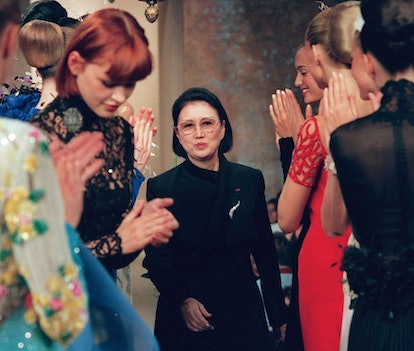 Photo by Thomas Coex/AFP via Getty Images
…
WMAG: Hanae Mori, the pioneering couture designer known for her blend of Eastern and Western aesthetics and butterfly motifs, has died of natural causes at age 96. The first Asian woman to be formally accepted into the French world of couture, Mori juggled showing at Paris Fashion Week, crafting custom designs for clients ranging from Empress Masako of Japan to bank clerks and Japanese Airlines flight attendants, and designing costumes for hundreds of films over the course of her decades-long career. The Japanese broadcaster NHK reports that Mori, who was nicknamed “Madame Butterfly,” passed away last week.
…
Born in Shimane, Japan in 1926, Mori attended a dress-making school after studying literature at the Tokyo Women’s Christian University. In 1951, she opened her first atelier above a noodle shop in Hiyoshiya, often dressing the wives of American soldiers in the wake of World War II. The designer then gradually made her way to Europe and the U.S. A visit to the atelier of Coco Chanel in 1960 solidified her passion for couture, and five years later, she mounted her first runway show (titled “East Meets West”) in New York. It officially put her on the international map: Hillary Clinton, Nancy Reagan, and Princess Grace of Monaco all became clients in the years that followed. While one of the most prolific costume designers in Japan, working on hundreds of films such as Yoshishige Yoshida’s Farewell to the Summer Light, Mori never neglected her namesake label. She joined Christian Dior and Karl Lagerfeld as a member of the Chamber Syndicale de la Haute Couture in 1977, when she also opened a showroom that was frequently visited by up-and-coming Japanese contemporaries like Kenzo Takada and the late Issey Miyake.
…
…
…
…
…

Three years later, the New York Times declared Mori a household name–“synonymous with Japan in women’s clothing, like Toyota in automobiles, Sony in tape recorders and Nikon in cameras.” While very much based in Europe—she also memorably created costumes for the Puccini opera “Madame Butterfly” in Milan in 1985—Mori continued to work steadily in her home country, outfitting Japanese athletes for the Olympics and Empress Masako for her wedding in 1993. Her fragrance line was a particular success, and her marquee scents for men and women remain fragrane shelf staples to this day. By that time, Mori’s namesake company had become a $500 million international business. Her designs tended to appeal to those who dressed more conservatively; her blend of Western design and Japanese sensibilities were not, as Vogue put it, “for women who wanted to make an entrance.” To Mori, “the whole Japanese concept of beauty is based on concealment.”

Emperor Naruhito and Empress Masako (wearing Hanae Mori) after their wedding at the Imperial Palace in Tokyo, 1993.

Two years after selling off portions of her company and being awarded the French Legion of Honor, Mori mounted her last couture show in Paris in 2004. “I feel that it’s all over,” she said at the time. “I was happy to see all of my good friends of the past 27 years come here. I feel no loneliness.” She took her bow alongside the couture bride, her granddaughter Izumi, who was among several to remember Mori on Instagram. “Thank you for all the amazing memories and experience,” she captioned a slideshow featuring photos of herself and her grandmother over the years.

Izumi and Hanae Mori walk the runway of the final Hanae Mori couture show in Paris, 2004.
…
by Stephanie Eckardt
…