Remembering a Master: Mugler’s Most Memorable Designs On and Off The Runway 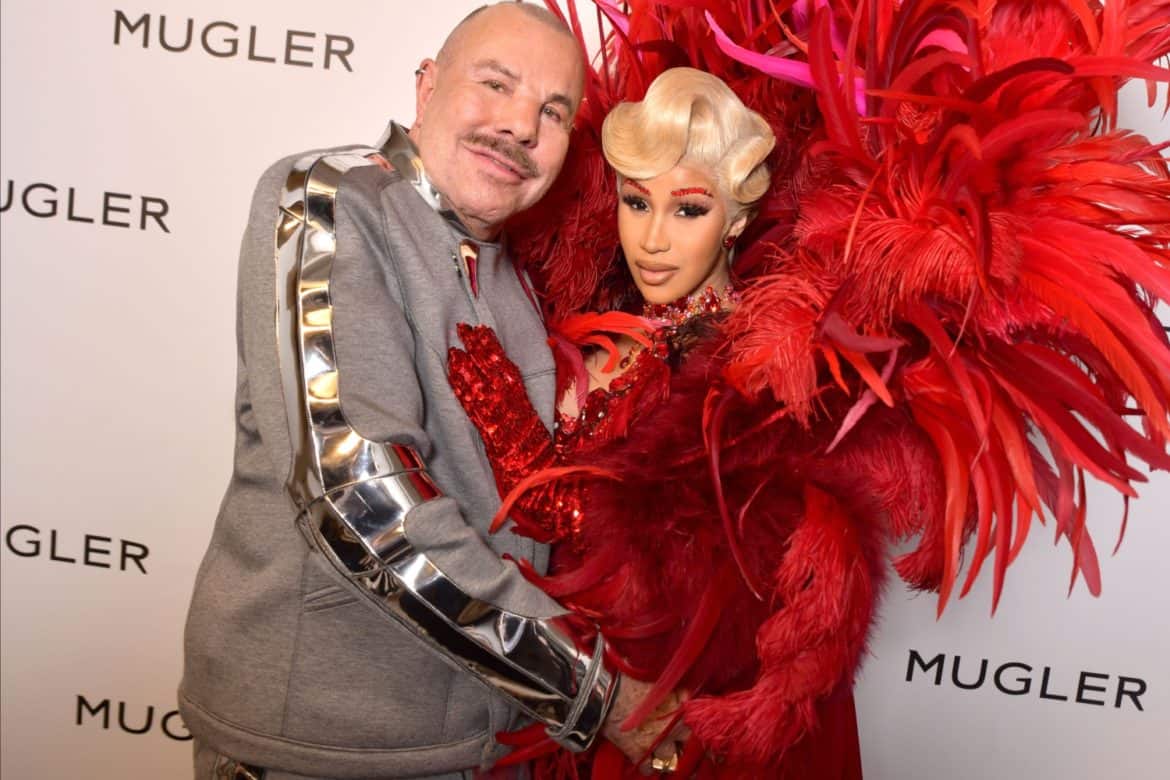 Chic Report: French fashion designer Manfred Thierry Mugler has died, aged 73. The couture designer is most famously known for pioneering the world of futuristic femme “power dressing,” dramatic silhouettes, and his unique and inspiring avant-garde maximalism. The news was confirmed by Mugler’s team on Sunday via a somber black square.

Born in Strasbourg, France in 1948, the trailblazing couturier was beloved for his undeniably entertaining, out-of-this-world runway spectacles, his designs which celebrated the female form, and his taste for sensual and extraterrestrial-inspired creations. Before he grew his eponymous label into a global success story, Mugler introduced his work with the opening of a Parisian boutique for his label Café de Paris in 1973.

One year later, he founded Thierry Mugler; a venture which spoke to his background—studying drawing, interior design, and dance—and it soon became synonymous with accentuated womenswear, exaggerated shoulders, and tapered waistlines. His dominatrix-inspired, PVC-heavy designs commanded the runway in the 1980s and 1990s, as seen on his go-to models and muses like Diana Ross, Grace Jones, Cindy Crawford, Kate Moss, Naomi Campbell, Jeff Stryker, Traci Lords, Carmen Dell’Orefice, Veruschka von Lehndorff, and Tippi Hendren. Mugler was also deeply inspired by the LGBTQ community, and would often cast transgender models and work closely with drag artists—including Thierry Mugler coursetier, Mr. Pearl. As for his enthusiasts off the catwalk, David Bowie, Celine Dion and Demi Moore, as well as Jones and Ross, were often found wearing his instantly-recognizable silhouettes.

The designer cited inspiration from all over, but was especially moved by the likes of Christian Dior and Cristóbal Balenciaga for their elegant glamour, though he was never one to follow directly in their footsteps. Indeed, once the Thierry Mugler label garnered worldwide attention, it wasn’t long before other designers were consulting his style book. Alexander McQueen’s frothy frocks pay homage to designs modeled in Mugler’s farewell show in 2000, while Julien Dossena’s embellished headpieces for Paco Rabanne and Balenciaga’s Spring Summer 2007 robotic metallic leggings are just some examples of pieces that nod to those from Mugler’s early ’90s collections.

The Thierry Mugler brand was later sold to Clarins in 1997, followed by the designer’s official resignation in 2002. It was then that the designer turned his full focus to the fragrance arm of the business. When released back in 1992, his perfume Angel (and later Angel Men) irrevocably changed the fragrance landscape. Alien’s debut in 2005 was equally as commercially successful, and Mugler’s offerings are ofted cited among the most popular scents in the world. It wasn’t until 2010 that the fashion side of the brand made its return—with a new name and new direction under its belt. The label is currently under the creative direction of Casey Cadwallader.

In recent years, Mugler had kept busy dressing A-list celebrities, like Cardi B, Dua Lipa, Lady Gaga, and Kim Kardashian West, in both archival and new custom pieces. During Paris Fashion Week in September 2021, a who’s who list turned out to celebrate with the man of the hour at the Paris opening of “Thierry Mugler: Couturissime,” a retrospective exhibit at the Musée des Arts Décoratifs (originally launched in 2019 by the Montreal Museum of Fine Arts) which delves into the designer’s incredible contribution to fashion. The event opened with a star-studded party, with Irina Shayk, Kim Kardashian West, Cardi B, and other devout fans in attendance. Marking the first major display dedicated to his work, the exhibition features 150 garments from Mugler’s decades-long career.

Citing an interest in fashion early in life, the late designer revealed his inspiration was constantly in the world of unknowns—in what hadn’t been done before. “I did make clothes because I was looking for something that didn’t exist. I have to try to create my own world,” he once said. Mugler’s agent Jean-Baptiste Rougeot has confirmed that the designer’s death was due to “natural causes,” and that he was set to divulge forthcoming collaborations in the coming days. The tragic news comes just days following the passing of André Leon Talley, and three months after Off-White’s Virgil Abloh’s death. As we enter the early hours of fashion’s busiest few weeks, may we not forget the impact Mugler’s visionary genius had on runways now and forever. RIP.

See below for a few of Mugler’s most memorable designs.