Six Reasons to Get Excited About Fashion in 2023

UNBUTTONED: How can anyone feel less than optimistic about a year that starts with a veritable explosion of polka dots?

Ten years after its initial collaboration with the Japanese artist Yayoi Kusama, Louis Vuitton has once again teamed up with Ms. Kusama for the first big collection of the year, and it’s a doozy. Hundreds of pieces of LV merch (sneakers, slides, bags, bikinis, bucket hats, coats, skirts and pants for both men and women) speckled with multicolor dots, metallic dots and pretty much every other permutation of dot imaginable, like joyful confetti raining down on a sea of logos.

Unveiled on Jan. 1 in Asia, and Jan. 6 in the rest of the world, the line raises the bar for what is fast turning into a hackneyed fashion trope. (Running out of ideas? Do a collaboration!) It also serves as an overture of good cheer for a year that is otherwise cloaked in uncertainty.

Yes, we can be nervous about household spending and geopolitics and maybe even a Covid resurgence, but take a moment to window-shop past Ms. Kusama’s spotty reimagining of the LV world and you’ll find it impossible not to smile. Even better, this is simply drop one of two. The next batch of goodies featuring more of Ms. Kusama’s signature work is coming at the end of March — a reminder that there are plenty of interesting, distracting and possibly even thrilling fashion developments that will shape our self-expression, and wardrobes, in 2023. What else can you look forward to?

The Gucci vibe shift (and other appointments and debuts) 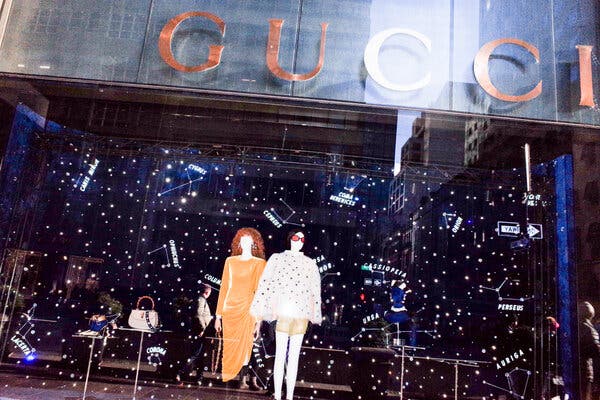 Style-setters of the world were shocked when Alessandro Michele, the designer who transformed Gucci from a gold-plated, python-skinned avatar of hard-core aspiration into a big-tent hodgepodge of emotion, product and identity, announced in November that he was stepping down. His departure leaves an enormous void at a luxury megabrand, not to mention pop culture in general, and it raises the question of what happens next: more of the same or a dramatic about-face? Whoever lands at the top will be responsible in part for resetting the mood of the industry.

Speaking of highly influential new jobs: Over a year after the death of Virgil Abloh, Louis Vuitton has yet to name a new men’s wear designer, but word is that an appointment will happen soon. Though whether a LV or Gucci announcement will take place before the upcoming season’s big debut — Daniel Lee at Burberry — remains to be seen. Mr. Lee is the highly celebrated designer of Bottega Veneta who left that brand under a cloud in late 2021. Whether he can effect the same turnaround for Britain’s biggest luxury house, and his own reputation, will be the test of London Fashion Week in February.

…
…
When Phoebe Philo, a.k.a., the Greta Garbo of fashion, revealed in July 2021 that she would be returning to fashion with her own brand under her own name, there was a clutching of breasts and shrieking with joy by an adult female population that had been trying to figure out what to wear ever since Ms. Philo left her position as creative director at Céline about five years ago.
…
After all, it was at Céline that Ms. Philo had become the patron saint of smart, grown-up women everywhere, with her embrace of quietly complicated luxury minimalism. Now she was coming back, and on her own terms! Joy! Rapture! More information was promised last January, but that month, and the entire year, came and went with no news from the Philo camp. The smart money says that the Phoebe Philo brand will finally make its debut in 2023. Expectations are higher than Lady Gaga’s platform stilettos.

Some major big- and small-screen style-setters

It is impossible to ignore the fact that movies and streamers have become not only mega-watching events, but mega-fashion events, and that costume designers are often as influential as any fashion designer. To that end, two premieres are almost guaranteed to filter into closets everywhere.

First up is “Daisy Jones & the Six,” the Amazon Prime series based on Taylor Jenkins Reid’s book that is scheduled for release on March 3, smack in the middle of Paris Fashion Week. The show stars Riley Keough as the Stevie Nicks-like main character, as well as assorted rock ‘n’ roll, flower power 1970s designs courtesy of Denise Wingate, the costume designer, which are pretty much guaranteed to shape festival fashion for the rest of the year. Then in July comes the movie event that has been seeping into collections since the first screenshots leaked last year: Greta Gerwig’s “Barbie,” with costume design by Jacqueline Durran. Expect a summer of neon pink and yellow, with the related postmodern revisionism of the classic fashion palette.

On May 6, King Charles III will be officially crowned, as will Queen Consort Camilla, and while the event will purportedly be less grand than the coronation of Queen Elizabeth II back in 1953, it will nonetheless provide a moment to reset the royal agenda after the Prince Harry and Meghan revelations (which will continue this month with the publication of Harry’s memoir). Get ready for at least a dollop of pomp and circumstance, as well as some serious bling and historic image-making by the immediate royal family, including William, the Prince of Wales; his wife, Catherine, and their three always coordinated children. Given that Prince Harry and Meghan will reportedly also be invited, the style stakes will be even greater.

…
That the fairy-tale ceremony comes only a few days after the Met Gala, this year held in honor of Karl Lagerfeld and offering a take on fashion royalty of a different kind, will make it a dressing week to remember.

And some courtroom intrigue

Fashion tends to have a horror of airing its squabbles in court, but two potentially significant cases will take place early this year in the Southern District of New York for all to hear. On Jan. 3, opening arguments in the Adidas v. Thom Browne trademark infringement and unfair competition suit took place, as Adidas goes after the Zegna-owned fashion brand (whose founder is also the new head of the Council of Fashion Designers of America) over whether its use of four and five stripes on its sportswear is too close to the Adidas three-stripe logo. Given the increasing synergies between the worlds of high fashion and sports, the case, which will continue through the next week or two, could have some major wardrobe repercussions.

Then at the end of the month (assuming the parties don’t reach a settlement between now and then) comes Hermès v. Rothschild, Mason Rothschild being the artist who created the MetaBirkin NFT series — that group of digital representations of fuzzy, colorful Birkin-alikes that was also a comment on consumer culture — with all its potential implications for what happens when questions of fashion, creativity, artistic expression and the metaverse collide. Your avatar, or the potential wardrobe for your avatar, not to mention the relationship between fashion and that nebulous collecting arena otherwise known as nonfungible tokens, may never be the same.

Vanessa Friedman was named the fashion director and chief fashion critic in March 2014. In this role she leads global fashion coverage for both The New York Times and International New York Times. @VVFriedman