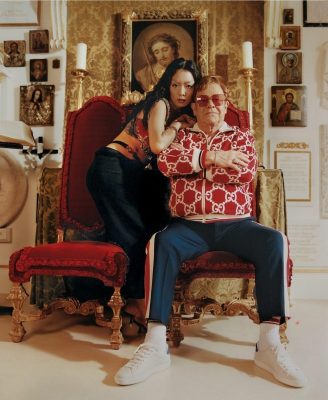 — and among her many fans is Elton John.

Few albums last year did more to rewire the notion of what pop music’s future might sound like than @rinasonline debut, “Sawayama,” and its theatricality found obvious kinship with @eltonjohn, who has been an exemplar of baroque pop for decades.

“Rina’s album, ‘Sawayama,’ just blew me away,” John said. “I had to call her up and tell her how brilliant it was. I mean, it was Led Zeppelin meets Prince meets a couple of things that referenced Madonna.”

The feeling was mutual. “Elton doesn’t realize how many people’s lives he’s made by contacting them and telling them that their work is great, that the work is seen,” Sawayama said. “And I was so amazed, when we met, by how much he knows about new music.”

Turns out John, 74, and Sawayama, 30, have much in common. During his breakout years in the early to mid-1970s, John was something of a pop heretic as well, a rock icon steeped in glam, psychedelia, blues, you name it. Both singers are outspoken about their politics and motivated by passion and care for the queer community. They also brandish imaginations global in scope.

John has lately been agitating for government intervention on behalf of young British musicians left logistically stranded in the wake of Brexit. And recently, thanks to intense lobbying from Sawayama — who was born in Japan and raised in England — the British Phonogram Industry extended eligibility for the BRIT Awards and the Mercury Prize, the U.K.’s marquee music prizes, to artists who’ve resided in the United Kingdom for five years, expanding the frame of what it means to be British.

After getting to know each other over the phone during the pandemic, the two singers met for the first time, following strict safety protocols, in a London studio in December so that they could record a collaborative version of Sawayama’s song “Chosen Family,” which will be released this month.

Tap the link in our bio to read more about the two from @tmagazine’s 2021 Culture Issue, which celebrates the relationships that helped us endure an impossible year. Photo by @harleyweir