THE NEXT CHAPTER OF CELEBRITY STREET STYLE IS GOING VIRAL

…
With the red carpet (mostly) out of the picture, an A-lister’s everyday fashion is all we’ve had to work off of — and it’s become a very important, highly influential piece in the celebrity style puzzle.
…

Fashionista: For as long as celebrity has existed, so has an interest in celebrity style. What was once primarily focused on red carpets, official appearances and other highly-curated moments has over the years morphed into its own cottage industry, fueled by tabloid culture, media (and brand) interest and an ever-expanding definition of fame and influence.

Any celebrity outing can be a fashion moment, an opportunity for someone to make headlines, be written about and get people talking. Paparazzi don’t even need to be present: They can just post a picture of themselves on their social media feeds — or on Story, even — and the credits will pop up, either thanks to eager fans or diligent publicists.

This kind of “everyday” style has become much more important for talent and brands alike during a time when the typical platforms for showcasing one’s fashion point of view — movie premieres, film festivals, press tours — haven’t been available. The shift was happening before the pandemic (see: Katie Holmes in a knit Khaite bra and cardigan set in mid-2019), and of course, there are celebrities that have always attracted this kind of attention (think: Rihanna, Beyoncé, Lady Gaga). But the past year and a half has been different: With no red carpet events or official functions generating these big fashion moments, a celebrity’s day-to-day wardrobe is all we’ve had to work off of.
–
And thus, we’ve seen Hailey Bieber and Megan Fox solidify their spots in this industrial complex through their “off-duty” wardrobes (both styled by Maeve Reilly), as well as new stars introduced to the fashionsphere. Whereas once, we’d see these outfits written up by fashion verticals and the Daily Mail, they now have the power to go fully viral.
–
A perfect example of this happened in late July. Bretman Rock — the Internet personality best known for his YouTube presence — was photographed walking down the streets of New York wearing a blazer, tank and distressed jeans by one of the buzziest names in the New York fashion industry: Peter Do. Pretty much as soon as his foot hit the pavement, the images began circulating all over the internet. They caught the attention of GQ, The Cut and much of Fashion Twitter.

Who’s up ? It’s Peter Do season

Obviously, Rock has a massive following and a global fan base, but he’s not someone who’s necessarily been thought of in the context of high fashion. That day, he was styled by Brian Meller, who just started working with the influencer after they were connected by his publicist. (Meller has also been collaborating with former “Bachelorette” and recently-announced franchise host Tayshia Adams; Rock and Adams share a publicist.) The outfit represented a “turning point” for Rock, according to the stylist.

“He’s always evolving, but he’s getting more into fashion, exploring his personal style more,” Meller says. “He has a few really exciting fashion campaigns and collaborations coming out soon… He just wanted to sort of elevate those street-style moments into [opportunities with] different brands that maybe he hadn’t worked with or were more unexpected, just having someone to collaborate with because he does have such an amazing sense of personal style himself.”

Meller had reached out to Peter Do, which has had a very limited celebrity record — presumably by design — since it debuted for Spring 2019. As it turns out, Do was a fan of Rock’s. (“That’s the thing that’s so amazing about Bretman: He has fans everywhere,” Meller says.) When it came time to make selects, the stylist focused on more casual daytime pieces that still felt different from what Rock had worn in the past, to show not only his evolution, but also his growing confidence.

“It was a New York fashion moment, but a display of that new confidence and willingness to take risks with fashion that he might not have had a year ago,” Meller says. “That’s why it was so unexpected in the end.”

There are various different elements of the look that could qualify as unexpected, from the pairing of an LVMH Graduate Prize-winning Céline alum that’s very selective with its celebrity dressing with a social media superstar to the specific pieces Rock and Meller picked. That’s what struck Luke Meagher, a.k.a. @hautelemode across platforms, who discussed the look as part of a July 2021 celebrity fashion recap on YouTube.

That “shock factor” is something that Smith believes is especially crucial if the celebrity themself is younger, emerging or entering a new era: “To be noticed in a saturated market of so many fashions… you have to also kind of level up You have to really try to push it with your stylist to see, ‘How can we make this a moment? How can we make this a look? How can we get people talking?'”

Meagher’s reading of the look is that, for Rock, “it’s a way of saying, as an influencer, ‘I actually do have a genuine understanding and appreciation for this industry. I do deserve to be a little bit more respected than [how] the industry looks at influencers, YouTubers, TikTokers, et cetera. In a very specific way, it’s about flexing a fashion muscle and commanding that respect.'”

Beyond being the Talking Point of the Day online, Rock’s look had a much bigger impact. “It’s a real cementation of Peter Do in a wider context of getting your name out there,” Meagher says, noting that Rock’s post about it on Instagram alone has over 2.7 million likes. “That’s a lot of reach. That’s a lot of discussion. That’s a lot of conversation. Those were images that really carried weight. I think those are some of the most liked images on @hautelemode’s Instagram, too.”

Up-and-coming brands are the ones that stand to benefit the most from this specific type of celebrity dressing — “the ones just leaving Parsons and receiving NewGen or CFDA Awards,” says Smith. “It’s easy, it’s no fuss, it’s low cost. If you want to get your brand out there, this is a quick way to do it. A lot of emerging brands can’t afford to do a show or to do a major advertising campaign, but if you find someone and she’s willing to post, that’s a great way to bolster your profile.”

Plus, on the red carpet, Meagher argues, these brands would be competing against the conglomerate-backed heavyweights, with their big budgets and contracted talent; street style gives them a chance to stand on their own. It’s also an opportunity for a celebrity to support historically marginalized designers and give them a major PR boost, Smith notes: “From that visibility, maybe an investor will see them; maybe [press] will see them and do a feature on them. It’s really leveling the playing field and it’s allowing us to notice designers that we normally may not have seen.”

It can be mutually beneficial, a branding opportunity for a designer and a celebrity alike — a case study in how a well-executed fashion moment can help elevate someone’s profile and build a narrative around them, without the need for a carpet or a buzzy project coming down the pipeline. It’s also a way to keep the talent’s name in the zeitgeist, to generate buzz even when they’re not attached to a specific film or show (and for brands to do the same).

Smith, for instance, works with the actor Skai Jackson, and, as she was in-between projects over the pandemic, collaborated with her on a social-first series where he styled her in a full look just to go about her day. “In the pandemic, the red carpet disappeared and the way that we did events was snatched away from us. We had to create events, we had to create moments,” he says. “I think that’s what a lot of stylists have done: They’ve created moments.” 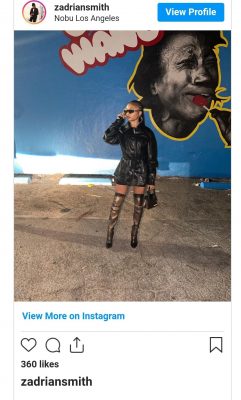 Behind the scenes, things are changing, too: Before, brands might not have loaned pieces for a celebrity to wear off-hours, and they might not have been as excited about a picture of a celebrity not on the red carpet — “but that’s all pivoting,” according to Smith.

“Brands realized that [those off-duty moments were] translating into sales, because those are the points where the market can directly tap into making those things more accessible,” he says. “Don’t get me wrong: We still want Cannes, we still want Venice, we still want Paris Fashion Week. But we also want to balance that with authentic human moments. If there’s anything that we’ve learned coming out of this pandemic, life is short. We want to see the moments that speak to humanity.”

The way we consume these moments has also evolved.

“Instagram was sort of an entry level, where these street style moments were able to blow up so much. When there’s a red carpet, there are hundreds of looks being posted, it’s overload; but when one person has a really good street-style look, it could get posted everywhere and get more coverage,” Meller says. “Now with TikTok, a lot of content has become about being more relatable — ways to dress yourself, copying things or DIY. All of that stuff has really had a resurgence, and that means that street style is more relatable and more something that someone can replicate and redo if they like it or are inspired by it.”

There are a handful of traits that can make a celebrity outfit go viral. There’s the shoppability. (“Even if it’s the earring, you need that girl to be like, ‘Oh my God, that look is hot. I can’t afford the dress, but I can afford the earrings,'” says Smith.) There’s campiness. (“People really do love a moment that’s just exaggerated, over-the-top, ridiculous,” says Meagher. “When the look creates a conversation, beyond just beautiful imagery and/or beautiful clothing, that’s a part of the viral-ness.”) Then, of course, there’s the celebrity themself: For example, Rihanna and Lady Gaga — two big trailblazers of this specific type of dressing — will always attract attention on this front, because they’ve built a larger narrative around their style.

“Rihanna can have on a trash bag and trust and believe, you’d be like, ‘That’s the baddest trash bag that I ever saw. Where can I get one from?,'” Smith says. “It’s the duality of who the talent is and if they carry that presence. 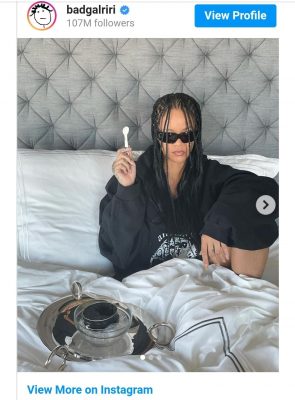 “Whether it’s Rihanna stepping out in New York wearing a piece from her extensive vintage archive or a massively influential social media star posting about an emerging New York label, this new chapter in celebrity street style is also reflective of, simply put, a love for fashion.

“It gives a genuine respect to the art of dressing,” Meagher says. “Of course, it’s not that these celebrities by themselves are creating these looks, but I have to say… it’s nice to see these well-thought-out moments happening from all these different celebrities, because I think it means that fashion — which for the longest time was sort of in the background — is actually being respected as a craft and as something that deserves thought and time and attention. I’m happy to see it in general.”

He adds: “As long as everybody keeps turning out good looks, I will not be complaining.”